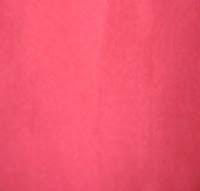 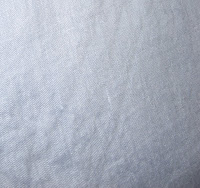 I have already purchased the fabric I plan to use for my reconstruction of the Pskov costume; the photographs you see here show the two fabrics, and in my opinion give an excellent idea of the effect they will have in the final product, even though the silk, if not the linen, is a significantly darker shade than the photographs show. For the shift, I obtained a light-weight, light blue linen, because the shift is believed to have been blue (although the surviving shift pieces are now a light brown, as the Pskov pictures show). The shift fabric picture appears on the left.The surviving loops from the apron dress portion are a much darker blue; however, I think it likely that the shift would have been lighter in color and weight than the apron dress, so I have planned accordingly in obtaining my fabric. I bought a dark red silk broadcloth to trim the cuffs and hem. A picture of the silk appears on the right.

Some aspects of the reconstruction will be simple, because the surviving bits provide a good deal of information. It is clear, for example, that the cuffs are long and fairly narrow--the measurements of the fragments tell us that, just as they tell us how wide to make the silk strip that trims them. Similarly, the width of the strip at the hem is known, though we don't know how far down on the wearer's body the hemline came. The reconstructors have assumed that the shift was ankle-length, and having no evidence on the point I'm willing to accept that assumption for my purposes.

But the neckline raises questions. We can tell from the neck portion that survives that the neckline wass gathered into sewn pleats, which are anchored with a folded strip of the same fabric. That strip extends past the ends of the neck opening and apparently served as a tie string. However, this means that, that unlike the neck openings of many tunics of the period, the neck opening of the Pskov shift was not cut out of the center of a larger piece of fabric. If that had been done, there would be no need to pleat the fabric to neck size. Clearly, the neckline was done by pleating much larger pieces of fabric to neck size, sewing (or perhaps only tacking) the pleats in place, and then sewing the strip of fabric that would become the neck string over it.

So how should I cut the body of the shift, and how should I make the opening that I will need to pleat down to neck size?

The Pskov team hypothesizes that the shift had a gathered neckline that tied closed in the front, and long sleeves which ended in the red-trimmed cuffs, as shown in this sketch. But I have reservations about this proposed design. The surviving piece suggests that the body of the shift was made of two pieces of cloth, with the center portions pleated to form the neckline (leaving a bit of unpleated section to form a slit to allow for passage of the wearer's head) and the rest seamed together at the shoulders. How does one make this style of shift, however, if the opening is in the center front, as the reconstructors suggest?

I suppose that it would work to make the shift out of three pieces of cloth: one wide piece for the back, and two pieces each about half as wide as the back piece for the front. The front pieces could be seamed together, leaving a slit for the head, and then the body could be pleated to the appropriate neck size.

It seems to me, though, that this type of neckline introduces extra steps (splitting and then seaming the front pieces) that aren't really necessary. It is easy enough to pleat a neckline from only two wide pieces of cloth--provided you don't intend to have the slit down the front. If the slit extends down the shoulder, no additional cutting is necessary; you seam the front and back pieces together at the shoulder and pleat your neckhole to size, leaving the slit down the top side where the shoulder will be, install your stay strip/neck string, and seam the shoulders together. Tunics with slit openings down the shoulder have been documented in early Russia (though perhaps not as early as the Pskov find's 10th century date) and in Byzantium also. In addition, the surviving neck piece from Pskov appears to show evidence of being sewn into the dress in only one place, not two as would be required with a front opening.

Am I crazy? Is there something I'm missing? Any thoughts would be appreciated (particularly before I cut my cloth). :-)
Posted by Cathy Raymond at 11:37 PM