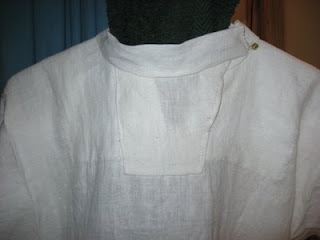 About a month and a half ago, I suddenly decided to make a reproduction of the Manazan shirt, the only complete garment known from the Middle Byzantine period (roughly 10th-12th c CE). The shirt was found in a multi-cave burial site in Turkey, intact except for part of the collar/neck area, still on the mummified body of its last wearer. Peter Beatson wrote up a description with a proposed pattern for the garment here.

I decided that this would be my first entirely handsewn garment. Like the original, my reproduction is made of linen. (I'm using Gutterman silk thread to sew it with, since I did not succeed in finding linen thread fine enough to sew it with before I started.) Unlike the original, it will be ankle length or thereabouts. The button is a tiny brass fake bell, bought in an Indian bead store in Philadelphia. Instead of a button hole, I sewed a small loop that I braided from coarse linen thread onto the end of the collar. A similar arrangement is found on the Skoldehamn shirt, as you can see from this closeup photograph of the shirt's neckline which was taken by Katrin Kania and appears on her excellent blog, A Stitch in Time.

To sew my reproduction shirt, I have been using a fine handmade bronze needle that I bought from Reconstructing History. While doing so, I have learned that, unlike a modern stainless steel needle, a bronze needle gets dull as you use it, and may even develop a crook or bend at the point that will catch on the fabric. The way to correct this is to resharpen the needle with a small whetstone like the ones Ragweed Forge sells to Viking era reenactors, a picture of which you can see here. No wonder such whetstones are found in Viking women's graves--they are indispensable to anyone sewing with the soft iron or bronze needles that were typically used for fine handsewing during that period.

The shirt is now done except for finishing the long seams down the body and hemming the bottom. After I complete it, I'll have my husband take pictures of me wearing it, and some pictures of the underarm area showing the side gore. For now, I only have pictures of the neck area, the best one of which I have posted here.

Since I have nothing else to wear with what is essentially a Byzantine shift, I am now planning to make an entire Middle Byzantine outfit. My goal is to make a lower class costume like the one featured on the Levantia site, here. So I will also need a gown or overtunic (called a himation in period), a mantion or cloak, and a savanion, which is a cross between a veil and a turban. I will talk about my plans for the other components of the costume in a later post.
Posted by Cathy Raymond at 12:13 AM