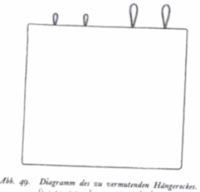 Many works of history that discuss the Vikings show Viking women in an overgarment that consists of two narrow panels of cloth connected with straps that hang over the shoulders. I made one of these dresses, back when I knew little about Viking clothing. SCA members sometimes call these "tea towel" dresses; a picture of mine appears at the left.

This design can be traced to the work of an early scholar of Scandinavian archaeological textiles named Agnes Geijer, though it does not bear much resemblance to Professor Geijer's actual hypothesis of how the overdresses worn by Viking women may have looked. In her first analysis of the textile finds from Birka in Sweden, published in 1938, Professor Geijer hypothesized that Viking women may have put two sets of straps on a wide sheet of fabric and wrapped one or more of these sheets around the body, in opposite directions. A picture of her proposed diagram of this type of overdress appears at the right.

Unfortunately, Professor Geijer wrote in German, and many Viking enthusiasts do not read German well. So the "tea towel" myth spread, until fairly recently.

In my next post, I include a picture of a pair of apron dresses I made that are more like what I believe Professor Geijer was really trying to describe.
Posted by Cathy Raymond at 1:06 AM