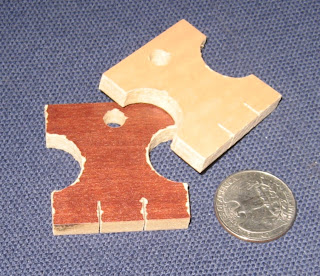 The items depicted in the accompanying picture are two of the "wooden" floss bobbins I ordered on EBay for my Viking sewing box. I've put the word "wooden" in quotation marks because the bobbins aren't really made of wood; they appear to be made from a thick fiberboard with a fake wood-grain finish applied to one side. Still, from a little distance they look convincing enough.


I was amused to discover today, from a website of sewing tools compiled by Karen Larsdatter, that the shape of my EBay floss bobbins closely resembles a find from Birka that is now in the Historiska Museet in Stockholm. A second object found at Birka is more like the bobbin shape Coblaith replicated in making her sewing box, as Coblaith demonstrated on her website.


No, we can't prove the Birka objects were used for holding thread, but the resemblance to the EBay bobbins is interesting.
Posted by Cathy Raymond at 11:01 PM