Inspired by my friend pearl, I have started to accumulate my Viking-period sewing implements in one place to prepare a period-plausible sewing/craft "basket" or "box". (Although I know that Viking women wore some of their sewing implements, such as snips and needlecases, on their persons, a sewing basket or box would be a nice place to store them when I'm not wearing Viking garb, and some of the articles needed for sewing have not been shown to have been worn by Viking women). The items I do have, and that you see in the second photograph, include a whetstone, a piece of chalk (kept in a small leather pouch I made for it myself), a block of beeswax (ditto), a pointed bone pendant that can be used to open holes for eyelets or as a seam smoother, several nalbinding needles (including a small curved one carved from antler), two sets of wooden tablets for tablet weaving, some linen thread, and my existing collection of metal sewing needles.

The photos posted with this entry show the contents of my little kit to date, and the neat birchbark box I have just acquired to keep all of these items in. (I don't have a needlecase, yet.) Birchbark was certainly used for box making in Russia, and I think in Sweden too (though I don't know of any examples of Viking birchbark boxes offhand, birches certainly grow in Sweden). 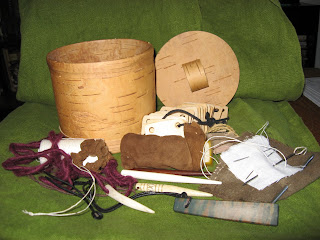 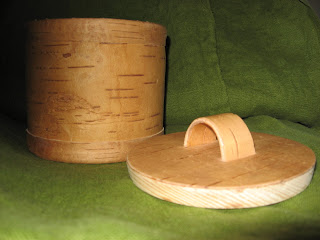 To replace the spool of thread I have in the box right now (seen at the left side in back of the photograph on the right) I have ordered some wooden "floss bobbins" to use for thread instead of the big modern-looking spool. I cannot document that wooden tablets were ever used for that purpose by the Vikings, but Viking women had to store thread on something, balls are kind of unhandy to use for sewing-quality thread as pearl pointed out, and small chips of wood with notches (which is what these "bobbins" are) would be easy to misinterpret in the archaeological record.

For those occasions when I want to be Anglo-Saxon, I can keep the essentials in a leather bag that I originally bought to house some of these items. :-)
Posted by Cathy Raymond at 12:56 AM