When I was first learning how little we actually know about Viking era costume, I came upon the following statement in Compleat Anachronist #59, an SCA publication about women's costume in early, post-Roman Empire northern Europe, including Viking costume:

Decorative cutout-shapes of tabby or samite silk were also applied to the gown layer. (p. 42)

This statement, coupled with a few assertions along the general lines that "appliqué" was liberally used by the Vikings, led me to concoct the piece of modern-style pieced-together-with-scraps-of-fabric applique shown in the photograph as ornamentation for the bottom of my "tea towel" style apron dress. 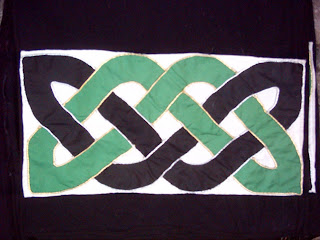 I eventually learned that my original idea of Viking applique shown in the photograph was almost certainly wrong (though sewing it--by hand--had been fun to do). I also later learned that the reference to "cutout shapes" in CA #59 was to an artifact in the Oseberg find, and that they were "animal" shapes, but I have yet to find a photograph, or even a good description, of those shapes. So over the years I have continued to wonder what the Oseberg "appliqué" looked like, and how close it might be to the modern idea of appliqué (i.e., a picture composed of cutout fabric shapes, instead of simply "braid and other pretty stuff sewn onto a garment as decoration").

Tonight, I re-read a Web article I'd found a while ago titled "How to Make a Norse Coat", by Comitessa Asa Beiskalda (formerly known as Countess Serena of the Black Ness). (I'd give the URL for the article, but I don't have it anymore.) The Comitessa's essay described her technique for making a Viking caftan coat; I had printed it out in case it had useful information on possible construction techniques for the next time I attempt to make such a coat.

To my surprise, however, she included, in her section on ornamentation, the following description of the Oseberg "appliqué":

The closest I have come to fully documenting applique is the use of silk pieces decorated with embroidery, then applied to the garment. The Oseburg [sic] burial unearthed a find like this with delicate animals done in chain stitch with silk thread, on a silk strip. It used yellow and red thread, with each animal appearing in its own roundel.

I was surprised because I had read this Web article before and had not recalled these two sentences. (That shows you the value of re-reading sources multiple times.) But I was also pleased, because this description gives a much better idea of what the actual find must be like than any of the other second-hand descriptions I had previously found. It suggests that the Oseberg "appliqué" find consists of a strip of silk fabric, with roundels cut from another piece of fabric sewn onto it. Each roundel, in turn, has a silk animal cutout sewn onto the roundel and chain stitching done around the edges of the cutout to hide the join between the two fabrics.

I still have no way to confirm whether my description of the Oseberg appliqué is accurate, but I do know that from the Late Roman Empire onward, animals and other objects or figures in roundels or squares were common decorative motifs, such as this Coptic example. Here an even later one, from 11th or 12th century Egypt, that features an animal. It would make sense that the Vikings would attempt to copy such a motif.

So although I now have a few more scraps of second-hand information, I have a better idea of what the Oseberg "appliqué" looks like. Is there a picture of it in existence? Does the big (and horribly expensive) book on the Oseberg textile finds include it? I wish I knew.
Posted by Cathy Raymond at 3:32 PM