Looking at the Leire statue reminded me just how common it is for women in Viking Age figurines to look as though they have a short narrow cloth covering their bodies from (approximately) waist to mid-calf. The length and width of these apparent aprons are further emphasized (as on the Leire figure) with either horizontal lines across the entire "garment", designs across the bottom edge, or, like the Leire statue, some kind of edging or design along the bottom and (or) sides.

As I thought about it, I realized that the Leire figure is not the only female figure that appears to be wearing an apron. This figure from the National Museum of Denmark, also wears a narrow cloth over her lap that looks like an apron (thank you, Pearl, for bringing this figure to my attention).

But apron-like designs on Viking Age figures of women are not limited to Danish pieces. The famous silver pendant of Freyja found in Götland also appears to be wearing an apron with horizontal trim across the bottom, under her clasped hands and her rows of beads. Some of the other female figures found in various locations in Sweden (i.e., the figure on the far left, and the third figure from the left, in the photograph under the link) show them also.

I'm not completely sure why I didn't focus on this feature of the existing Viking images before. Granted, the only evidence for the wearing of aprons (as opposed to the so-called "apron dress") during the Viking Age comes from Finland and the Baltic. Those finds survived because the Finns and Balts sewed lots of bronze coils onto their clothing, particularly onto aprons, and this had the effect of preserving parts of the apron as well as giving very exact information about its size and about what parts of the body the apron covered while it was being worn. In Scandinavia, where metal trim was sometimes sewn onto sleeve ends and bodices, but nowhere else, it is still possible that similar aprons were worn, but were not preserved for the archaeological record because they bore no metal trim to preserve them.

Nor am I the only person interested in Viking Age clothing to fail to consider aprons as a possible feature of Viking wear. In the years in which I have eagerly sought out and viewed photographs of Viking clothing reconstructions made by reenactors, costumers, and museums, I have found only one who wears an apron with her Viking garb. The accompanying photograph shows her work. Her name is Deborah Lane. I met her through the MedCos mailing list. 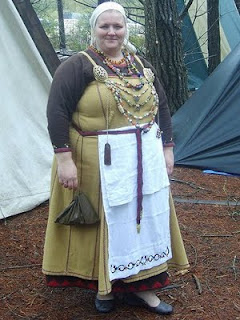 Consideration of the apron question may also help to answer another long-standing question about Viking women's clothing; namely, whether Viking women wore belts. Belt buckles rarely turn up in Viking women's graves and, to my knowledge, the only graves in which they have turned up are not in Scandinavia but in Viking-settled areas of England, Scotland, and the islands north of Scotland. Many have speculated that if Viking women wore belts, they must have worn tablet-woven belts, because so few belt ends and buckles have been found in women's graves.

If most Viking women wore an apron supported by a tablet woven belt, like Deborah and the woman at Eura, it would help explain why so little belt hardware has been found. Belts with buckles are usually made from leather, and it would be difficult to use a leather belt to support an apron in the manner of the Eura woman's apron (i.e., wrapping the belt around the body once, catching the top edge of the apron under it, then folding the top edge over that part of the belt before wrapping the remainder of the belt once again and tying it) because most leather belts are not long enough to wrap twice around the body, or flexible enough to hold the apron firmly and comfortably even if they were long enough.  Deborah's recreation, which shows her tablet woven belt holding her apron on in the manner of the Eura woman's apron, illustrates the point, though Deborah has added metal belt ends to her belt (I don't know of any women's graves in the Viking Age where two belt ends but no buckle have been found).

I need to think more about this issue, but an apron ornamented with embroidery, tablet weaving, or some other textile trim might be an appropriate addition to a recreated female Viking outfit.
Posted by Cathy Raymond at 3:13 AM