I continue to find extremely interesting articles in NESAT X. Two of the articles I read recently strongly support the idea that dyed fabrics may have been more common than we suppose in Scandinavia during the Roman period--and probably later as well.

Riggaard, Maj G. and Scharff, Annemette Bruselius.  The Impact of Dyes and the Natural Pigmentation of Wool on the Preservation of Archaeological Textiles. NESAT X (page 221). 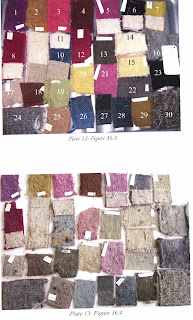 The researchers obtained a number of specimens of wool fabrics woven from pigmented and unpigmented wool, and one natural silk fabric.  Some of the wool samples were dyed and/or mordanted with substances known to have been used during the Iron Age, including the Viking period. Also, some of the wool samples had a piece of undyed white wool attached to them as a manner of ascertaining whether dyes or mordants from the other piece of wool would migrate to the untreated wool.  The dyes included madder, cochineal, Brazilwood, indigo, weld, and walnut, and the mordants included alum, copper, cream of tartar, and tin. The specimens were buried in soil-filled boxes and left in a hothouse (to accelerate any deterioration) for eight months. Some of the boxes were buried without lids (to help simulate aerobic burial conditions) while others had sealed lids (to simulate anaerobic burial conditions). All boxes were watered originally and the aerobic boxes were watered monthly also.

When the researchers  retrieved the samples, visual examination (with and without microscopy of several kinds) led to the following interesting conclusions:

1) Except for the specimens dyed with madder or another red dye, which still appeared reddish in color, most of the specimens appeared to be brown, beige or "natural" in color. This suggests that many archaeological textiles which look undyed may well have been dyed originally.

2) The specimens dyed with indigo all appeared to be very pale blue or yellow-beige.  The blue color survived best in the "aerobic" boxes.  The authors theorize that the anaerobic conditions tended to change the indigotin back to its "leuco" state (when the dye solution is yellowish), eliminating the intense blue color.

The authors note that these changes correspond well with the observations made of known (from testing) dyed specimens from bog finds (e.g., Lønne Hede).  Copies of the "before" and "after" photographs published with this article are reproduced here for educational purposes. (The uppermost photo is the "before" picture.)

The other article is more technical, but tends to confirm the conclusion that many early textiles were dyed, even if they do not appear dyed when archaeologists remove them from the soil.  Here is the citation:

Berghe, Ina; Devia, Beatrice; Gleba, Margareta and Mannering, Ulla.  Dyes:  to be or not to be.  An Investigation of Early Iron Age Dyes in Danish Peat Bog Textiles.  NESAT X (page 247).

This article reports the results of laboratory testing of 186 archaeological textile specimens from Denmark that are dated to between about 380 BCE and 410 CE for dyestuffs. The results detected chemicals associated with common Iron Age dyestuffs in most of the specimens. The authors observe:


The results of the natural organic dye analysis, using HPLC-DAD [high-performance liquid chromatography with photo diode array detection], clearly indicate that the majority of Danish Early Iron Age bog textiles were originally dyed.  Eight different dye constituents, belonging to the three main groups of natural organic dyes were identified, significantly enlarging out knowledge of the use of biological dye sources in the Early Iron Age. However, dye components were only detected at trace level; hence it has to be considered that some dyes might have been missed.  (page 250)

The eight dye substances, which will be familiar to many Early Period textile researchers, amateur and otherwise, are: luteolin, apigenin, quercetin (found in weld, saw-wort, dyer's broom, and chamomile), indigotin, indirubin (woad), rhamnetin (found in Rhamnus cartharticus L. and other berries), alizarin, and purpurin (found in madder, ladies' bedstraw, and dyer's woodruff). Five unidentified substances were also found; the evidence suggests that one of those came from a Scandinavian orchil, a kind of lichen.

It is good to see technology beginning to confirm the instinct of many Early Period reenactors to dress in bright primary colors!
Posted by Cathy Raymond at 9:05 PM