Recently, I obtained a copy of the following article by Flemming Bau describing his theories about what the Viking age women buried at Birka were dressed:

As I have mentioned in this blog before, Bau believes that the Birka graves provide evidence for the wearing of apron dresses with an opening in the center front, over which an apron (or "front cloth") might be worn in front and a kind of cape with a train (or "back cloth") might be worn covering the woman's back. His evidence in support of these ideas is interesting, and I will discuss it in another post. What I want to discuss in this post, however, is an insight I had about the pleated Birka shifts while reading Bau's article. Although I don't read Swedish  (or Danish, which, as one of my readers observed, the article actually is) very well, the article includes an English translation for all of the captions on the illustrations and charts, and provides a detailed English summary. Examination of the information provided by the summary and illustrations has made me rethink what I believed I knew about the evidence of pleated shifts found at Birka, and what that evidence may be telling us about how those shifts were made. 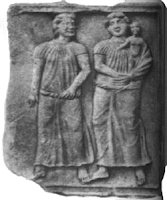 Although it isn't the primary focus of his article, Bau discusses shifts because he believes that linen imprints found on textile tools that hung from the tortoise brooches of some of the women in the Birka graves provide physical evidence that the apron dresses must have been open in the front.  As a tangent to part of his discussion, Bau notes that the "pleated" Birka shifts (as opposed to the unpleated "plain" ones) may have looked like the shifts seen on women in Russian folk costume.  He provides an illustration from Max Tilke of such a costume, which I have reproduced on the left.  It shows a woman wearing, among other things, a full-bodied shift pleated to a closely-fitted neckband.


Now, there is seldom justification to assume that an item of clothing that was worn as folk costume in the 19th or early 20th centuries C.E. was worn significantly earlier in time.  However, there is evidence for wide shifts pleated to a neckband being worn in the Slavic areas of Europe much, much earlier in time than the Viking age.  For example, the shifts shown on Slavic women on the Adamklissi monument (discussed in this recent post of mine) also are full cut shifts pleated or gathered to a narrow band that fits closely about the neck.  A picture of the Adamklissi shifts, found on Hilde Thunem's webpage about Viking underdresses, appears on the right.  (If the page does not come up, as sometimes occurs, try Google's cached version here. 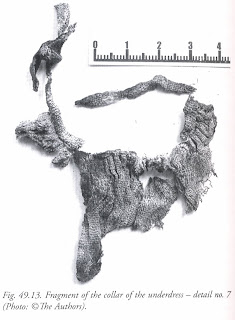 In addition, there is physical evidence of at least one costume that featured a pleated neck shift with an apron dress--that is the 10th century Pskov find.  The Pskov find has been dated to the 10th century C.E., as have the pleated shift finds at Birka.  A picture of the neckline from the Pskov shift that I have reproduced from the NESAT X article about the Pskov find appears on the left. So we have evidence that women in the Slavic/Russian areas wore loose shifts that were pleated to a close-fitting neckband at least as early as Roman times, and that such shifts were worn in the Viking age.

Archaeologists, starting with Agnes Geijer, theorized that the pleated shifts for which evidence turns up in the Birka graves were imported from the area we now think of as Russia. For a long time the archaeologists and reenactors have speculated about how these shifts must have been made and about what parts of the garment were actually pleated.  To obtain information about this issue, the pleated linen remnants found inside tortoise brooches can be very useful. 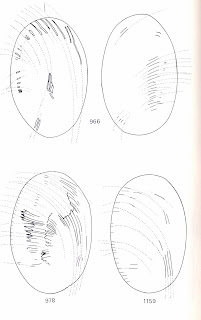 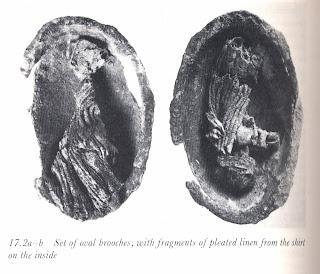 On the right is a photograph taken from Inga Hägg's article  in Cloth and Clothing In Medieval Europe which shoes of the inside of a pair of tortoise brooches that were found at Birka.  I have no information to indicate the scale of the pleating in these brooches, but they do not seem to be so much finer than the pleating around the neckline of the Pskov find.  Notice that the pleats appear to bend to one side.  To the left of this paragraph  is a series of sketches that appear in Hägg's article (apparently reproduced from Stolpe's original excavation sketches), illustrating the way the pleats bend to one side or the other. In her web article about Viking age shifts, Hilda Thunem observes, that it is unfortunate that Stolpe did not indicate on which side of the body each brooch was found. "This means that there is no way of identifying the left-hand and right-hand brooches, and consequently no way to learn whether the bending of the pleats always pointed towards the shoulders, always towards the throat or differed from one serk to another." I agree with Ms. Thunem that Stolpe's failure to record on which side each tortoise brooch was found is unfortunate, since that piece of information would help confirm or refute the theory I am about to describe.

The pictures of shifts that are pleated to a neckband show that the highest concentration of pleats appears within the first few inches from the neck.  The farther down the body one moves, the shallower the pleats become, until by the time you reach the waistline or so  the fabric is no longer pleated, as we see in image of the women in the Adamklissi shifts.  Below this paragraph, to the left, is a cropped picture of me, wearing a simple apron dress over an unpleated linen shift.  The photograph shows that the brooches fall in the area where the highest concentration of pleats are found in the Adamklissi image and the Tilke picture of a woman wearing a pleated shift with folk costume. Admittedly, some women wear their brooches at a lower level on their bodies than I do, but enough grave finds indicate that tortoise brooches were worn close enough to the neck that my practice of wearing the brooches this high was not uncommon.   (I've included Stolpe's sketches  of two of the Birka graves from the Hägg article to further illustrate this point.) 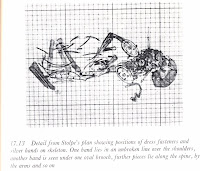 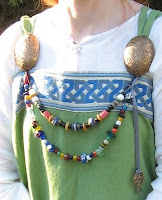 My hypothesis, based on the images and information discussed above, is that Geijer and those who agree with her was correct when she theorized that the pleated Birka shifts were imported from Russia.  However, if my theory about how the Russian shifts were made is correct, those shifts were not pleated through the entire body and sleeves, and they were not pleated by wetting them and using a broomstick-pleating or similar method.  Instead,  my hypothesis is that the shifts were pleated at the neckline, where the pleats were permanently held with a sewn-on neckband.  The reason we see pleated linen inside some tortoise brooches is that the brooches were worn close enough to the neck that they lay on top of the pleated areas--and perhaps were even pinned through them.  The rest of the garment would not need to be pleated for this to occur.   In other words, the idea of the completely pleated linen shift  may be a misapprehension which has arisen by the fact that we only have fragments of shifts from the graves.  Under this view, the Birka shifts were still luxury items, but they were luxury items because they used more cloth than a plain shift (made, perhaps, with rectangles and triangular gores) did--not because they had to be pleated again after each washing. 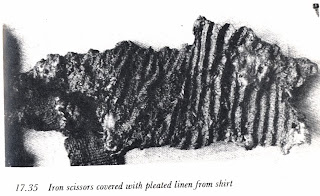 Hägg's article includes a picture of a pair of scissors found in Birka grave 597, which is reproduced at the right.  Part of the pleated linen has adhered to the scissors.  Note that the pleats appear fairly deep.  However, this fact does not necessarily indicate that the entire body of the shift worn by the woman in grave 597 was pleated.  The scissors in grave 597 were found high on the body, between the brooches, as the diagram from Bau's article, included below this paragraph, shows.  More specific information from the Birka finds to ascertain whether there are any graves containing scissors with pleated  linen remains that were found in a position low on the body, since such evidence would tend to disprove my hypothesis.

If my hypothesis is correct, it answers one of my questions about whether the Pskov shift should have gores.  The answer would be that the Pskov shift would not have had gores.  The body of such a shift could be made by sewing together rectangular pieces of fabric to form a wide tube, and then pleating the top of the fabric into a neckband.  That method, which would produce a result consistent with the Adamklissi image, would make the shift more than wide enough that gores would be superfluous.  My hypothesis would also eliminate the need to posit that the shifts were broomstick pleated, and then re-pleated every time the shift was washed, since pleats made at the neckband would be permanently sewn in place.


There may well be responses to some of the points I've raised above.  If any of my readers knows of any facts that either support or refute the points I've made above, I would like to hear from you.  It would be wonderful to build a coherent theory as to how the pleated shifts of Birka were made.
Posted by Cathy Raymond at 6:25 PM