In my few spare moments, I sometimes re-read sources on Viking costume in the hope of having an inspiration that will enlighten me about an issue, or that will motivate me to embark on a new area of research.   So far, I haven't had much in the way of inspiration, but I have stumbled across a question or two. 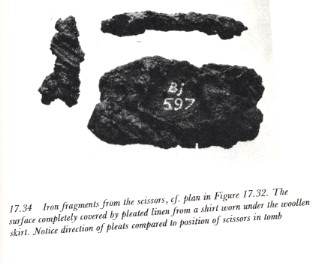 Tonight, my question involves Birka grave 597.  I can best explain it by recourse to pictures.  The first picture, taken from Inga Hägg's article in Cloth and Clothing in Medieval Europe about the Birka finds, is a reproduction of Hjalmar Stolpe's sketch of Grave 597 when it was excavated.  Note that the iron scissors are shown, blade tips pointing downwards, between the two tortoise brooches.


The picture to the right, which is from the same article, shows "iron fragments from the scissors"  found in grave 597. They are covered by linen fragments. The pleats referenced in the caption appear to extend down the long axis of the fragment. However, it's difficult to tell how wide the large fragment shown in this picture is, or what part of the shears the fragment was associated with.  That makes it difficult to discern whether the pleats run in vertical rows, parallel to the length of the shears, as most people believe the shifts in the Birka graves were pleated.

The last picture, still from the same article, shows a textile fragment on iron scissors.  Again, the scale of the fragment is not given.  Hägg's article suggests that this fragment is also from Grave 597; indeed, it could be a larger picture of the fragment shown on the left in the photograph above. The pleats are clear, and run perpendicular to the long dimension of the fragment. 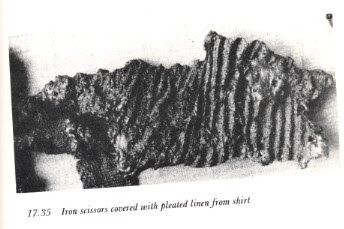 So is it too strange to consider that at least one of the Birka shifts may have been horizontally pleated?  Or is it more likely that the fragment shown in figure 17.35 from the Hägg article was small, only about as wide as the iron scissors?  In that case, the pleats really are running in the expected direction.
Posted by Cathy Raymond at 11:59 PM