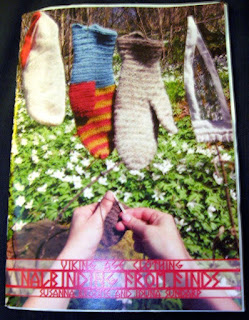 On Wednesday, both the nalbinding booklet I'd ordered and the yarn I intend to use for my first project from that booklet arrived in the mail. Clickable photographs of both appear with this post.

The colors of the yarn as shown in the photograph are close to their actual appearance. The gold yarn is a bit less reddish and the green a bit paler, but the general level of contrast between the two is accurately captured.


I was afraid that I would be unable to understand, let alone follow, the instructions in the booklet for how to work the Icelandic mitten or the Coppergate sock (the two items which I am interested to make my own versions of). However, the directions for both appear to be straightforward.   Best of all, it turns out that I don't need to know how to pivot to make either of these items. The mitten, in particular, merely requires you to do a chain of stitches of a specified length (determined by hand size), fasten the ends of the chain together with a stitch, and continue adding stitches around the resulting loop, increasing and decreasing (both pretty easy to do in nalbinding) as necessary. Fantastic!

The booklet includes instructions for three types of stitch I do not yet know how to do; Dalby stitch, York stitch, and Finnish stitch. Dalby stitch is used in the original of the Icelandic mitten I hope to recreate, while the Coppergate sock uses (naturally), York stitch.  I decided that I should at least experiment with both of these, using the remains of my snarled yarn from my false start at sprang, to decide whether I can learn the designated stitches quickly enough to use them for this project.  I should also practice making a ring out of a chain of stitches.

Making a chain of stitches in Mammen, the one nalbinding stitch I know pretty well, was simple enough, but understanding the authors' directions for both Dalby stitch and York stitch threw me, mostly because I couldn't see the starting position suggested for those stitches well enough from the pictures in the booklet.  So I turned to the Internet for pictures, videos, anything that might help.  So far I've found this video tutorial for York stitch which I think I can manage to use if I go through it slowly.

Late last night, after staring at the booklet instructions on Dalby stitch, I think I figured out what the instructions mean.  I tested my understanding this afternoon by doing a few inches of stitching.  It  was far from perfect, but appeared to be consistent with the illustrations in the booklet. I'll practice it some more, but I may end up attempting my first pair of mittens in Mammen stitch, just to be able to concentrate on the construction details for the mittens.

Progress is being made, though.  Onward!
Posted by Cathy Raymond at 5:44 PM