Band and Cord for My Køstrup Project 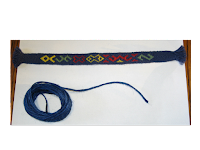 The tablet-woven band and wool cord for the Køstrup apron dress that I am planning to make have arrived!

I am very pleased with the quality of both band and cord, and also with the fact that the band and cord are a good match in color for each other (though the band looks much darker in my photographs).  The photographs are clickable to show the image larger and with more detail.

After I downloaded these pictures, it occurred to me that I had forgotten to include an item in them that would show the scale of the cord and band!  Perhaps some actual measurements will help.  From the beginning of the fringe on each end, the band measures 25.5 cm (about 10 inches) long and 1.8 cm (about 3/4ths of an inch) wide.  The cord looks as though it's a lighter blue than the band, but I think that is because it is plied from wool felt, and thus reflects light a little differently than the threads in the tablet-woven band.

The fabric for the planned apron dress is a single-tone herringbone twill in a rose-red shade which should look lovely with the blue.  However, it will look visually different from the original Køstrup dress in at least two respects.  First, it will be in a twill weave (the Køstrup fragments are woven in tabby) and it will not be blue (the Køstrup fragments had been dyed blue).  But my primary objective is to demonstrate how I think the tablet woven band and the cords trimming it were fastened to the dress, and that should be easier to observe given that the dress itself will be a different color from the band.
Posted by Cathy Raymond at 12:24 AM