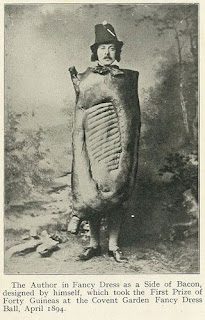 Readers with long memories may recall that I have written, in the past, about costumes made of meat and other foods.  I used to think that this sort of costume was a purely 20th century form of humor, but the photograph with this post shows that I am wrong.


I recently re-discovered a photograph I once found on the Internet, dated April 1894.  It appears to the left side of this post.  Unfortunately, I cannot recall where I found it.  It appears to be from a newspaper, and records that the gentleman won 40 guineas as first prize at a fancy dress (i.e., costume) ball in Covent Garden.

It seems to me that someone should compile a history of historical costume that focuses on costumes meant to depict strange and fantastical subjects.  The 16th century concept of a masque involved such costumes, and the costumed parties would participate in a kind of skit, often based on mythological themes.  Masques may have involved concepts that are in better taste than a side of bacon, but the ultimate purpose--entertainment--was the same.

If any of my readers are aware of other manifestations of the modern idea of a "costume" before the 20th century, please let me know in the comments.   Otherwise, have a great April Fool's Day!
Posted by Cathy Raymond at 6:00 PM