In addition to thinking about the fabrics I should use for the Pskov apron dress, I've been pondering the actual design of the apron dress itself.

Today, no one knows exactly how apron dresses were made. We know they were held up by fabric loops that hooked over the pins of tortoise brooches, because the loops and brooches are almost always all that remains of the dresses in the graves. But the design possibilities for the body of the dress are varied, and include tubes both plain and pleated, flat sheets wrapped around the body, and fitted garments that look like modern pinafores.

The fabric find from Pskov that is believed to be the apron dress is fairly large--large enough to have been either part of a body-encircling tube or a flat sheet. It is not clear from their reconstruction drawing whether the Pskov reconstructors have assumed that the original was a wrapped flat sheet or a tube, either of which is a supportable position, given that we do not have a surviving piece that is large enough to rule out a tube shape.

On the other hand, the stitch holes in this piece that the reconstructors assume to have indicated the original locations of the fabric loops on the front of the garment were 85 cm apart.

As costumers and reenactors who have dabbled in reconstructing apron dresses know, those dresses fit most comfortably and stay up best if the front loops are placed between 15 to 20 cm apart. 85 cm, more than four times as wide as that measurement, will just about completely encircle my modest mammary endowment. The Pskov reconstructors understand how wide this would make the garment, which is why their tentative reconstruction drawing shows the front part of the garment hanging low in front, nearly to the waist.

However, having the front loops positioned so far apart and the front of the dress hanging so low poses real practicality problems. Peter Beatson's summary discusses one of them. He notes, correctly I think, that if the front loops were 85 cm apart, the dress would tend to slip off the shoulders when the dress was worn.

But there is another problem.

As I have noted in a previous post, the portion of the dress that has survived is expensively trimmed, not just with plain blue silk, but with an elaborate, pictorially-patterned silk that may have been 100 years old at the time the dress was made--an expensive antique. The reconstructors concluded, very plausibly, that this part would be the top front of the apron dress. But then they concluded that the front of the dress would hang in low folds that would have the effect of hiding the expensive silk trim from view. Why go to the effort to sew that narrow bit of expensive, rare silk on a part of the dress that will just sag into folds, making the rare strip of silk nearly impossible to see?

I don't think any Viking or Rus woman would have done that. Everything we know about Vikings and Rus suggest that they were very status conscious and sought to display their wealth in clothing and jewelry as prominently as they could. I think that means that the wearer of the Pskov apron dress would have displayed that valuable antique silk prominently on the front and center on her chest, unobscured by folds. That would be especially true in the early/medieval period, when clothing served the same kind of social display function as Maseratis and Jaguars do now (and could be nearly as costly).

What I'm thinking is that it may be more likely that the Pskov apron dress was not a tube-shaped dress, but was a wrapped sheet, held closely against the body by more than two pairs of loops. With the information I now have about the find, I cannot say whether this explanation is already ruled out by the surviving apron dress piece or not. I know that the Pskov team found some short loops, and the apron dress piece has stitch holes that are approximately 85 cm apart. But I don't know whether there are other locations on the find that might also have traces of stitch holes, let alone how far from the two identified stitch holes such additional areas might be.

Moreover, no one knows the original dimensions of the fabric piece that is believed to be the surviving portion of the body of the apron dress. The front panel with the two kinds of silk appliqued onto it is complete, but there are narrow pieces of silk leading from it that likely ran across the rest of the top of the dress--and those strips are damaged on the ends and obviously incomplete. This matters because a wrapped apron dress needs at least three sets of loops--one pair in front, one in back, and one to support the wrap-around section. The photograph with this entry, which shows my orange wraparound apron dress laid out more or less flat, may help make the nature of the problem clearer. 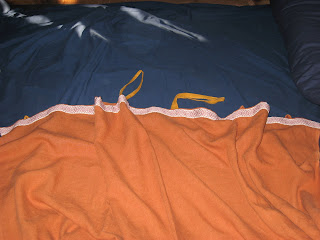 If the Pskov reconstructors had found other stitch holes than the two sets that are 85 cm apart, they likely would have incorporated them into their reconstruction. However, that fact alone doesn't mean there weren't other loops. For example, there could have been loops on the other parts of the dress--the parts beyond the ends of the thinner silk strips--that did not survive. I need to think about whether it is possible to create a three-pair-of-loops arrangement that is consistent with the condition of the Pskov "front" piece.

In addition, there is a question about which side of the Pskov piece is "right side up", but I'll get to that in a later post.

EDIT: I've thought of a technique that may give me a better handle on the problem and how to come up with a working design, but I don't have time to work on implementing it tonight, and I'll be away all weekend at a science fiction convention. Maybe I can get to it next week, though next weekend is more likely.
Posted by Cathy Raymond at 11:00 PM