Pskov Re-Creation Project--Which Side Is Up?

The question of the placement of loops or straps on the piece believed to be the surviving portion of an apron dress from the Pskov grave is intertwined with the question of which side was the top side, and where on the body the piece would have appeared when the dress was worn.

The Pskov reconstructors have assumed, reasonably I think, that the wide blue silk piece with the red silk woven with a hunting design appliquéd on it would have been at the front and top of the dress, and that the narrower blue silk strips would have gone around the rest of the top of the dress. As can be seen from this sketch, the reconstructors concluded that the angle where the narrow blue silk strips join the front piece bearing the red patterned silk would be located approximately at the armpits when the dress was worn, and that the front panel rose higher on the body than the rest of the apron dress.

This theory strikes me as improbable. Cutting the dress this way would require the loops connecting the back to the front of the dress to be even longer than usual (as the sketch clearly indicates) and would make the dress even likelier to fall off the shoulders than the 85 cm placement of the front loops would do.

In addition, the top edge of an apron dress naturally comes to armpit level. Cutting the dress lower at the armpits is unnecessary for comfort; if the dress were too tight at the armpit lengthening the straps a bit, or perhaps moving one of the loops a few millimeters, would be enough to alleviate the problem.

Suppose instead that the reconstructors are placing the piece upside down. If you invert it as I have shown below, there is no dip at the armpits and the top of the dress is at the same level all around. It becomes possible to place multiple pairs of loops, and pull the dress more tightly around the body, so that the red silk stripe across the wide blue silk panel in the front is plainly visible.

The first sketch displayed with this post attempts to show what I mean. The dotted line at the top of the drawing is where I suggest the top of the fabric originally ended, with the portion outlined in red showing (roughly) the surviving textile. Compare it, if you will, to Peter Beatson's sketch of the top portion of the apron dress here. 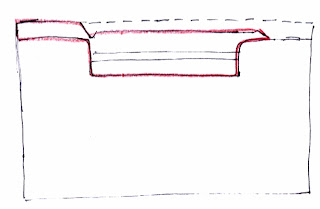 My view of how the outfit likely appeared in wear is shown in the second sketch, which appears to the right. Yes, it's clear from the sketch that I'm no graphic artist, but what I'm trying to show here is the gathered neck shift of the Pskov reconstructors' theory under a wrap around apron dress much like my orange one. I have shown the apron dress to be somewhat shorter in length than the shift so that the red silk strip sewn to the bottom of the shift shows beneath the apron dress.

I still want to photograph my orange dress, spread absolutely flat, measure to see how far all of the loops are from each other, and compare that photograph to the sketch of the Pskov piece, but these sketches should show where I'm going with this line of thought. Any comments on my theory would be greatly appreciated.
Posted by Cathy Raymond at 11:25 PM