Sewing for Byzantium--Thoughts About Seams

One of the things I've been thinking about in designing my himation is how to sew and finish the seams.

Most of the seams described as being used in the tenth century or thereabouts are flat-felled in some manner, and feature running stitch as the main stitch to unite the pieces, with the seam allowance being stitched down with whipstitch or in some other manner.

Modern sewers usually use a machine stitch or, if handsewing, an ordinary running stitch, to unite two pieces of a garment. Unfortunately for me, I hate doing running stitch by hand with a passion. I find running stitches tough to make (particularly if one prefers straight seams and lines of stitching), slow, and too weak for garment construction when done by hand (particularly when executed by me). 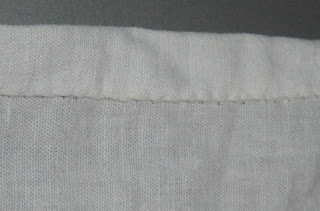 On the other hand, I have gotten pretty good at doing whipstitching, which today is mostly used for hems. Since most of the garments I have hand-sewn to date are modifications of flat sheets, which only required hemming, I have done a lot more whipstitching than running stitching, and have gotten fairly good at sewing a close, even stitch that doesn't show much on the right side of the garment. An example of my whipstitching (a portion of the hem of the savanion I am making) from both the right and the wrong side of the garment appears in the photographs beside and below this paragraph. 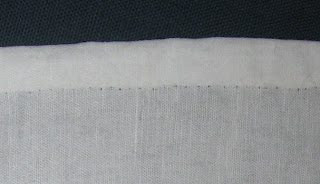 On the Manazan shirt, I followed Peter Beatson's recommendation and used tatbeet seams. With this seam, you fold over the fabric on each edge that you wish to join, and, from the right side of the garment, whipstitch the folded edges together. After that you turn the joined pieces to the wrong side, fold the edges of the fabric (that are now the seam allowance) under, enclosing the raw edges, and whipstitch each folded edge onto the garment. Peter Beatson's illustration makes it very clear what is going on. The resulting seam is very tough and unlikely to ravel but, like the flat-felled seams on blue jeans, is very noticeable. A portion of the tatbeet seam on the body of my Manazan shirt, seen from the outside of the garment, appears in the photograph just below this paragraph. 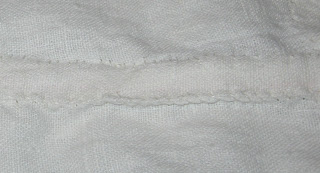 Then I read this article by Laura Mellin, describing how garments were seamed in the Elizabethan period. Judging by her illustration, the Elizabethan seam was a kind of reversed tatbeet seam. The edges of the fabric would be folded over, and the folded edges would be whipstitched together--but on the wrong side of the garment. If the fabric is prone to ravel, you fold the raw edges of the seam allowance under and sew them down onto the garment (also from the reverse side) with running stitch; otherwise, you just stitch the seam allowances onto the garment with running stitch without doing anything to the raw edges (as Laura's photograph shows).

Aside from the fact that this type of seam would be more conspicuous when done on linen (which I will be using for my himation than on wool (which the Elizabethans usually used for outerwear), this seam appears to be perfect for me--it would be faster to sew and stronger when sewn than any kind of simple running stitch. As for the fabric edges, I could always whipstitch them down, as I'd done for the Manazan shirt, since the result would be less likely to show on the right side of the garment than running stitch would.

How authentic is this kind of seam for a 10th century Byzantine linen garment? I'm not sure. On the one hand, there are certainly early-period garments in linen with flat felled seams. On the other hand, however, the early period stitch types shown on the Archaeological Sewing pages for linen shows seams where the folded edges are stitched together from the inside with a "modified" running stitch, not whipstitching. I can't visualize this "modified" running stitch well enough (despite the illustration) to tell whether it is equivalent to the Elizabethan method I plan to follow. On the other hand, any handsewing that relies on whipstitching will go much faster for me than will handstitching that requires back stitch or running stitch. So I'm going to use the stitch Laura shows, anachronistic or not.
Posted by Cathy Raymond at 1:02 AM