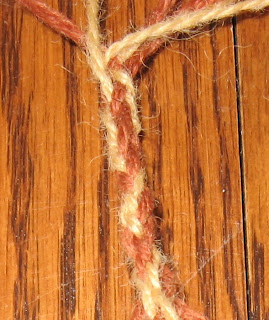 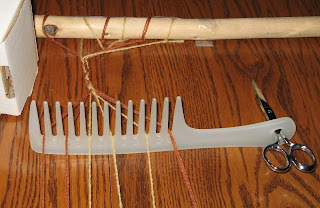 Last night, after only a little bit of tinkering, I came up with the following improvised set-up to make the 6-strand "bread braid" without going entirely crazy. (The ends of the strings, with their improvised bead weights, are hanging off the end of the table, out of view.)

The primary virtue of this set-up is that it helps keeps the strings from tangling into each other while I do the braiding. That's because the comb lets me keep each strand far enough away from the others to avoid tangling while maintaining the position of each strand in the sequence. Pearl was right--the beads don't do much to prevent tangling; they even tend to encourage it by giving the strings enough momentum while hanging to whip around each other. Clothespins, as she suggested, might be an improvement, but I don't have any handy (Curse my decadent American use of a clothes dryer!), so I won't be exploring that possibility.

The second photograph shows the amount of braid I've made so far (about 2 cm, more or less). Except for a few misplacements of strands (which I doubt will be noticeable in the ultimate use of the braid) it looks like what I have in mind; a round braid with alternating red and yellow bits.

Still, I need to make another braid for the other side. This method is taking long enough that I will probably try a stitch in time's suggestion for making it as a 3-loop fingerloop braid. Doing so *should* be faster, and it's okay by me if the result is flat on one side and round on the other, since the braid is being made to be sewn onto a dress. I can always put the braid on the dress with the flat side down.
Posted by Cathy Raymond at 7:36 PM