I'm heading off on a trip in two days, and we'll have company tonight and tomorrow so I don't know how much sewing I'll get done. That means it's time for a quick update on the project that's closest to being done--the Hedeby-inspired apron dress. 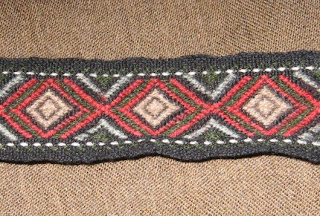 I have all the seams sewn. I gave the dress a quick press with a steam iron (which certainly was not done in period!), and am surprised and pleased at how elegantly the dress falls and how straight and well-finished the seams look.

Just a few minutes ago, I began to hem the top with a herringbone stitch, just like the original. I'd never tried herringbone stitch before, and am pleased to note that it's not as hard as it looks. My stitching isn't in a perfectly straight line, but since the stitches are nearly invisible from the right side and will be partly covered by the trim I plan to sew on top of it, that doesn't matter much.

The trim is the only element of this dress that isn't going to be based on the original find. It's a woven, 100% wool trim (hard to find) that features a simple line of diamonds--a period motif. A picture of it appears above, positioned on top of a piece of the same fabric as the apron dress. The photograph shows both the trim and the fabric as being a bit lighter in color than they really are, but is otherwise true to the actual appearance of both trim and fabric.

After I finish the top and bottom hems I will need to sew in the darts along the sides, place and sew the loops for the brooches, and, finally, sew on the braid. Hopefully, I will have the dress finished by the end of the month.
Posted by Cathy Raymond at 6:10 PM