A few weeks ago, I purchased a work of costume history that I have been ignoring for several years: Margaret Scott's Medieval Dress and Fashion (British Library, Sept. 15, 2009). The opportunity to look through the book before buying, coupled with the low price of the newly published paperback edition ($29.00 USD) induced me to make the purchase.  I have finished reading the book for the first time, and I am sufficiently impressed with it that I decided to write a review.

The first costume historians, such as Cesare Vecellio, were amateur ethnographers; persons who traveled widely and sketched the costumes they saw on their travels. Later, there were passionate amateurs who became interested in particular subjects (such as Mrs. Bury Palliser, who wrote A History of Lace) and thus became inspired to write about them.

Nowadays there are three basic approaches to the study of historic costume. One is the art history approach. Art historians, such as Anne Hollander, approach historic costume by examining period artworks in the context of the conditions that produced them, and draw conclusions about the costumes that must have been worn from that study. Archaeologists, such as Agnes Geijer and Inga Hagg, analyze remains from graves and other kinds of digs and attempt to reconstruct what was worn from surviving artifacts and the information that can be gleaned from those artifacts with careful visual examination and scientific testing. Others analyze period works of literature, wills, records of textile transactions, and other writings in an attempt to learn more about the production of textiles and costume, and to make deductions from that knowledge.

I personally believe that costume history will not advance until there is a more coordinated effort among these types of study, but sometimes a talented person will succeed in shedding much light on the subject of early costume by means of a careful approach to one of these three forms of discipline. When I started reading Dr. Scott's book, I thought at first that it might be such a coordinated work.

Dr. Scott is an art historian, so her primary approach is to look very closely at illuminated manuscripts and, using her general knowledge of the art and the period, tell the reader what those works communicate about period costume. Consequently, her book emphasizes the visual aspects of costume study. If she hadn't so much as written a single line, her book would still be worth buying for the numerous, large, color closeups of medieval illuminations in both secular and religious contexts. Every two or three pages, there are a full two pages of large color closeups of medieval illuminations, and there are also black and white photographs of illuminations throughout the book.  Moreover, many of these illuminations are not commonly seen in books on period costume, though like most pictures in books on medieval costume few images come from Eastern Europe or other non-Western European areas.

Because of the illustrations, this book is a treasure trove, at least for people who are not looking for detailed knowledge. It also has a fairly substantial bibliography. However, for serious researchers hoping for more detailed information, the book is of limited value, for a number of reasons.

1.  Only a survey. Dr. Scott's book addresses European costume through art from the tenth through sixteenth centuries, so naturally she does not have room to discuss costume developments year by year, or country by country. She mentions a lot of interesting facts in passing, and it is up to the reader to decide which tidbits of information to follow up. This may be a challenge, because the book does not have footnotes or endnotes. 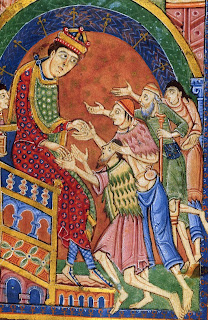 2.  Statements not based upon art history may be questionable. Like most specialists, Dr. Scott is not necessarily familiar with relevant topics that fall outside her specialty. For example, she comments upon one 12th century miniature in the Pierpont Morgan Library (Ms. M.736, f.gr.), which shows King Edmund giving alms to several peasants, including one with blue underbreeches and a pink sheepskin cloak (shown in the photograph to the right) as follows:


The poor receiving alms are most unlikely to have worn such colourful clothing in real life.  Blue underpants are even more unlikely, as underwear was made of linen, which is very difficult to dye, even though blue was one of the easiest colours to produce, from woad. ... Pink dyed sheepskin cloaks are equally unlikely--what we have here is an exercise in very pretty colour schemes.  (p. 45)


Dr. Scott may be correct that most folk needy enough to be begging for alms were unlikely to have dressed in dyed colors, but in my opinion some of her other assumptions in the above passage are questionable.  For example, blue was typically produced with woad, which, along with indigo (which contains the same dye substance, indigotin), are among the few vegetable dyes that work well on linen.  Several blue dyed samples of linen have, in fact, been found in 10th and 11th century graves, two at Birka, and one, more recently found, in Pskov, Russia.  In addition, although linen does seem to have been used commonly as underwear in the early middle ages, as the Viborg shirt, Manazan shirt, and St. Louis's shirt show, that does not mean that the very poor would have had linen instead of wool undergarments.

3.  Frustrating digressions. For no readily apparent reason, Dr. Scott occasionally comes forth with interesting information that is not readily available in the easily obtainable surveys of medieval costume. For example, in the chapter on sixteenth century costume, she mentions a German fashion for men (presumably wealthy ones) to wear their hair in "gold nets"--a claim I have not found in any other source.  Unfortunately, because there are no footnotes, it would be necessary to comb the bibliography (fortunately broken down by chapter) to attempt to ascertain the source of this interesting claim.  She also claims, in a discussion of Spanish women's costume in the late fifteenth century, that a particular hairstyle, which involves wearing the hair "in long tails ... hanging down their backs and wrapped in veils" (p. 168) and which I'd thought an Italian fashion is actually Spanish.  Here, a look at her bibliography suggests that her source is Ruth Anderson's excellent book Hispanic Costume, though once again there are enough other sources for the chapter that I have not encountered that it would be frustrating to attempt to confirm her statement.

I am not sorry I bought this book. The great number of large color photographs from medieval manuscripts is very useful for costume research purposes, and some of the facts Dr. Scott scatters through the text are fascinating. At the paperback price, many costumers and costume scholars will find it a worthwhile purchase.  But it is not the type of book that can serve either as the introduction to, or a comprehensive discussion of, medieval costume.
Posted by Cathy Raymond at 10:23 PM