As time permits between shoveling out from various blizzards and doing other things, I have been reading the other articles in NESAT X.


One of the articles, "Elite and Military Scandinavian Dress as Portrayed in the Lewis Chess Pieces", is an analysis by Elizabeth Wincott Heckett of the costume details shown in the famous Isle of Lewis chess pieces (cited hereafter as "Heckett").  Heckett mentions that there are other chess piece finds which date approximately to the same time period (i.e., the 12th Century), including a queen that was found in County Meath, Ireland.  The sketch on the right, reproduced from Heckett's article, shows the piece. Heckett makes this comment (Heckett, p. 272. ), which appears to apply to both this piece and the queens among the Lewis chess pieces as well:

It became apparent to the author, whilst analysing silk and wool headcoverings from Viking Age Dublin that comparisons can be made between specific archaeological finds and the Lewis Chessmen.  For example, the queens wear shoulder-length veils under their crowns, and a purple silk cloth-piece from Dublin has the right dimensions to be worn in this way. 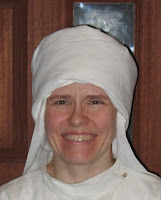 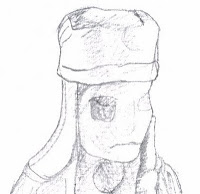 Heckett's comment may well be true of the Lewis pieces, but what the chesspiece from County Meath appears to be wearing does not look to me like a crown worn over a short veil.  To me, it looks rather like a wrapped linen headdress; specifically, it looks like the savanion I made for myself last year.  I have placed head shots of myself in the savanion and of the County Meath chesspiece side-by-side here for comparison.  Readers may also recall the later Irish headdresses of the same type, which I discussed here.

Immediately after Heckett's article in the NESAT volume is an article by Anna Zanchi called "Headwear, Footwear, and Belts in the Íslendingasögur and Íslendingaþættir" (cited as "Zanchi").  Zanchi points to portions of these sagas which indicate that Icelandic women wore several different kinds of wrapped headdresses, one of which, the lín, appear to have been worn by women in general:

While it is impossible to identify with precision the nature of the lín-headdress worn by Guþrún's maids-in-waiting, the hofuþdúkr (headcloth), its use and its design, can be understood by the situations in which it is described.  The twenty-ells-long hofuþdúkr that Gísli wishes to give to Ásgerþr implies a garment that was repeatedly wrapped around a woman's head. As Ásgerþr is already married, there is no reason to belive that this particular headpiece was meant singularly for the purposes of a marriage ceremony.


Zanchi and Heckett have given me food for thought.  Though neither have provided evidence for wrapped headwear among Viking Age Scandinavian women, they have produced some interesting evidence that headdresses like the savanion were worn, not just in Byzantium, but in Scandinavia and Ireland in the 12th-13th centuries (the Íslendingasögur and Íslendingaþættir date to the 13th century). I find interesting the possibility that similar headwear fashions appeared in such geographically-separated parts of Europe at that date.
Posted by Cathy Raymond at 6:05 PM