My copy of NESAT X arrived last week. Unfortunately, it's arrival was immediately followed by a huge blizzard, so that I spent most of my time working from home and trying to help my husband dig us out from the snow drifts, instead of reading it.

I did read the official write-up for the Pskov find. It does include additional, and interesting, information that was not in the preliminary articles but, as always, raises additional questions which, by way of memorializing my own thoughts, I will set forth here. 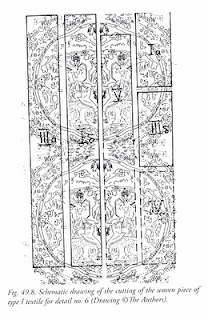 1)  It appears that silk used on the apron dress and underdress consist of three different kinds of samite.  Most of the trim on the apron dress comes from a textile with a "Bahram Gur" hunting pattern.  The illustration at the right, which is from the article, shows how a piece of the Bahram Gur textile was cut into strips to be used for trimming, and the other illustration (also from the article) shows which sections were applied to particular portions of the apron dress's uppermost section.  The Bahram Gur sections are described as now appearing to be blue-green, with a yellowish tint, while the sections marked "IIa" and "IIb" in the apron dress sketch are described as "reddish violet" and come from a different textile--the same textile that was used to trim the cuffs of the underdress.  The third type of samite was of indiscernible color  (though the authors suggest that it might have also been reddish violet, which would create a pleasing color contrast) and consisted only of a narrow band, 4.5 cm wide that was used as binding (referred to as "trimming" in the sketch below) on the outside edge of the apron dress.

2) The full write-up refutes my original speculation that the Pskov team might have been placing the top of the apron dress upside down in devising their reconstruction. As the attached sketch also indicates, stitch marks clearly show in three places on the edges of the silk binding.  However, the original reference to the strap locations being 85 cm apart does not appear.  Instead, the article contains the following, somewhat cryptic paragraph:

The second article, in Slavic areas called a sarafan, may be akin to the Scandinavian apron.  This is connected to details no. 6 (Fig. 49.4 [i.e., the long piece with the two types of Bahram Gur silk used as trim]) and no. 8--an apron dress strap (Fig. 49.14 [it is shown here]).  Detail No. 6 is of particular interest in terms of the reconstruction of the type of garment which it decorated.  This detail, sewn from several strips of silk cloth, probably served as the trim of the top edge of the sarafan (as mentioned above, over the entire surface of the reverse side, a destroyed layer of blue linen and the remains of sewing threads have been observed).  On the broad central area of detail no. 6, at equal distances from the centre, the base of a strap of blue linen on one side, and the remains of sewing threads on the other, have been identified.  The distance between the holes was equal to the width of the preserved fragment of the strap.  On one of the narrow lateral strips of the detail described, at a distance of 20 and 25 cm from the place to which it is attached on the broad central part, the remains of threads and traces of sewn on straps have also been recognized (Fig. 49.5 [i.e., the sketch of the top of the apron dress above]).  The general symmetry of detail no. 6, as well as the symmetrical position of the remains of one of the straps, and the traces of a similar one on the central part all suggest the presence of the identical straps on its second narrow lateral strip.  Furthermore, since any trace of sewing on the straps is absent on the narrow strip, we may suppose that these were long straps.  Such straps are also mentioned by I. Hagg (1974) and F. Bau (1982) in their description of the apron.  These consisted of a narrow long strip of cloth turned into several layers and folded in two in the middle.  The ends of the strips (each separately but close to each other) were sewn to the top edge of the clothing from the back, thus forming a long loop. 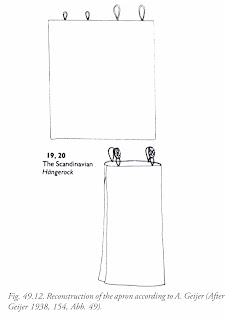 Based upon these observations, the Pskov team concluded that the Pskov apron dress is rather like Geijer's original idea of the apron dress--a piece of cloth with two small loops on the front, two long loops in the back, folded around the body and open on one side.  Zubkova, Orfinskaya & Mikhailov at 296 (the sketch reproduced on the right is also from the article).

Assuming that the sketch of the apron dress fragment is to scale, the two strap locations on the top of the broad central part may well be 85 cm apart (though the present article does not say so).  However, if the Pskov garment was an open-sided garment suspended on straps, like the design proposed by Agnes Geijer, there are even more serious questions about how the garment could stay in place during wear without a belt, or without pinning the apron dress to the undertunic (of which there doesn't seem to be evidence)--or by adding additional straps to the apron dress, as I had suggested.

I'm not sure what to make of this. It seems to preclude the possibility that the Pskov apron dress was a wrapped garment (since if there were additional loops on the part of the dress we have, it seems likely that the researchers would have seen traces of them). The article also discusses Flemming Bau's hypothesis involving multiple loops, front-cloths, and back-cloths.  The authors reject the idea of front-cloths and back-cloths as being inconsistent with the physical evidence of the Pskov find, though they do not consider whether the presence of more than two pair of loops could indicate a wrap-around design.

Does the Pskov evidence rule out a wrap-around design?  What if there were multiple long straps on the "back" portion of the apron dress (i.e., the part that did not survive from the Pskov grave)?  I'm thinking of my green linen apron dress.  Spread out, that dress looks like this (see photo on the left). If the Pskov dress had another set of long loops on the back side of the apron dress (in addition to the one that appears near the right-angle bend shown on the sketch of the surviving apron dress fragment and its missing mate), it might not matter so much that the small loops on the front are so far apart.  Or, perhaps there were two sets of long loops--one set of which were crossed in the back (so that the strap on the right-hand side connects to the left-hand brooch in the front, and vice versa) and one of which (the ones near the right angle bends on both sides) were not.

I need to think about this new information.  Maybe I need to get some really cheap scrap fabric, and experiment with pinning different strap configurations to a piece of fabric where the front is cut like the Pskov fragment.

3)  The article confirms what I had suspected from the picture of the neckline of the underdress, which is "turned inside out along the edge of its neck, cut out and gathered in fine pleats. ... The folds were fixed with a thin band, which pulled together the edges of the collar."  Zubkova, Orfinskaya & Mihkailov at 297.  However, the find suggests that the brooches might in fact have been pinned into the underdress.  The article notes that "On its pin [i.e., the pin of one of the tortoise brooches], straps of linen and a fragment of a collar from a garment made from a similar linen textile were preserved."  Zubkova, Orfinskaya & Mihkailov at 292 (emphasis supplied).


As always, any thoughts, comments, or information that might bear upon the construction of the Pskov apron dress (or anything else about the find, for that matter) would be greatly appreciated.
Posted by Cathy Raymond at 6:22 PM