Among the other articles in NESAT X is an article by Annika Larsson about whether a certain passage in the Rigsþula has chronically been mistranslated, and actually describes a warrior in the late Viking Age.  Larsson's theory is based upon the following passage from the Rigsþula, which reads in the original (as nearly as I can render the dicritical marks with my limited knowledge of HTML):

According to Larsson, the above passage is typically translated as follows: 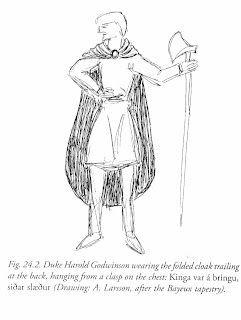 The master of the house sat
and twined a bowstring,
arched a bow of elm,
set shafts to arrows,
while the mistress of the house
studied her arms,
stroked the fine linen,
tightened the sleeves
High curved her headdress,
a coin-brooch was on her bosom,
a trailing robe she wore
a bodice blue-dyed.

The black-and-white photograph on the upper left is a proposed recreation by Larsson showing a warrior as she believes the Rigsþula depicts him; with fabric bands around his forearms and calves, wearing armor.  The sketch on the upper right is also by Larsson, and is a redrawing of a figure from the Bayeux Tapestry, wearing armor over an "imperial cloak" which is fastened with a brooch positioned on the center of his bosom.

Larsson's theory, simply put, is that the common translations of Rigsþula are wrong because they assume that the passage in question refers to a woman's clothing.  She thinks that the passage actually describes the clothing of a warrior, whose wife is assisting him to dress. Thus, she maintains that the correct translation is more like this: 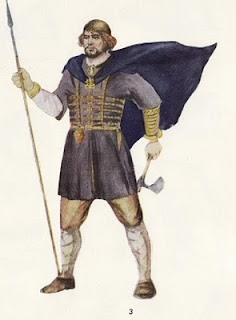 I might have dismissed Larsson's theory out of hand, except for my awareness of reconstructions from the Baltic that show people wearing both leg wraps and arm wraps.  A reconstruction drawing of such a costume from the Latvijas PSR Arheologija (and located for me by Santa Jansone on the Yahoo baltic_garb mailing list; thanks!) appears on the lower left.  This Latvian warrior is dressed like Larsson's idea of a warrior from the Rigsþula, with bronze-ornamented arm wraps and (in this drawing) plain leg wraps.  He is also wearing an "imperial cloak," fastened with a brooch on his chest, over his "blue-shining" armor.  Apparently the Baltic habit of ornamenting clothing with large amounts of bronze preserved enough of such wraps that they are known to archaeologists.  But that doesn't mean that wraps without bronze ornamentation weren't worn elsewhere in Scandinavia, as Larsson now suggests.

Perhaps Larsson is on to something here. I can't say for sure, since I don't know anything about Old Norse, and thus have no basis for questioning her proposed translation of Rigsþula. I do note that the Baltic garments Larsson's description most resembles are post-Viking Age, which may support the theory that the clothing references in the sagas are to clothing that was commonly worn at the time the saga were written down, i.e., the 12th or 13th centuries CE, not during the Viking age.
Posted by Cathy Raymond at 1:27 AM