I recently obtained another article in Danish, but this one, unlike the Flemming Bau article, is about a Danish Viking age find.  The citation of the article is:

The article discusses the Køstrup find, which is the find upon which Shelagh Lewins and I based our front-pleated apron dresses.  The article also discusses other aspects of the Køstrup find, three of which I find interesting:
1.  Is the central, pleated part of the apron dress a pieced-in insert or not?
2.  How were the apron-dress straps constructed?
3.  The article states that a kind of fabric sandwich, consisting of two layers of wool with down in between them, was found over one of the tortoise brooches.  Is this wool-and-down fabric sandwich part of a caftan, a coverlet, or a cloak?
This post will just discuss points 1 and 2; the part of the find that may be evidence of a cloak/caftan deserves a post of its own.

Point 1, unfortunately, will be getting short shrift because I do not have much information to discuss, and Rasmussen and Lønborg do not shed as much light about it in their article as I had hoped.  Shelagh Lewins and I have both assumed that the Køstrup dress was made from a rectangle of cloth sewn into a tube, and that a portion of the tube was pleated to fit the tube to the wearer's torso.  However, the English translation of the article by Freydis Svensdottir, a member of the Norsefolk_2 list (which translation pearl thoughtfully brought to my attention), seems to suggest that Rasmussen and Lønborg believe that pleated section may have been inserted into the dress.  The relevant sentence reads:


"So much is preserved of the trägerrock, that one can see that the dress has been closed at front and has ended at the top by a ca 5 mm wide seam, that is sewn with running-stitches. In one end of the fragment is the remains of a pleated piece, that was placed between the brooches, probably to give width to the dress. The pleating seems to have been made by a simple gathering with a linen thread." (emphasis mine).

It is possible that either the translation, or the original, language of the article is  simply unclear, and that the authors are not suggesting that the pleated section was pieced into the dress.  On the other hand, perhaps some scholars believe the Køstrup dress was made that way; for example, the pleated apron dress reconstruction in the Trelleborg Museum looks as though  the pleated part was pieced into the dress.  However, without a better photograph than I have of the piece, or other additional information, I cannot think of any further conclusions to draw about the construction of the pleated portion.

Point 2, on the other hand, is greatly clarified by the Rasmussen and Lønborg article, as the drawings from that article and the photographs of straps I have included above hopefully will illustrate.

The photograph on the left is shows a portion of an apron dress strap from one of my apron dresses (the wool dress based on the Hedeby find, to be exact).   The whipstitching along the edge provides a clear indication of how I made the strap.  This was the method I used.  I cut, or ripped, a piece of linen that was about 4 cm wide, folded the raw edges inward, toward the center of the piece, then folded the entire piece so that the folded edges were together, and stitched the folded edges together.  The result is a strap as long as your original fabric piece but only about 1 cm wide.  I adopted this method, not because of any of my research, but because it was the fastest way to make the straps.  Using this method, the only seam on the straps is on the edge of the piece; front and back are perfectly smooth.  However, the stitching along the edge will show (if anyone looks) when the garment is being worn.

The photograph on the right illustrates another possible method for making such straps.  It shows a portion of a strap which I quickly stitched tonight, simply for demonstration purposes.   I started with a similar fabric strip, but after folding the raw edges over just enough to hide the jagged edge, I  simply lapped the folded edges together, one over the other, at the center of the fabric piece and whipstitched the two edges together there.  This approach leaves the seam down one surface of the finished strap.  That surface can be treated as the "back" or "inside" of the strap,, i.e., the side placed against the body, and need not be visible when the dress is worn. It is a bit slower to sew, since it's harder to hold the edges together in this position, and one has to take a bit of care not to draw the needle through what will be the front side of the finished strap. 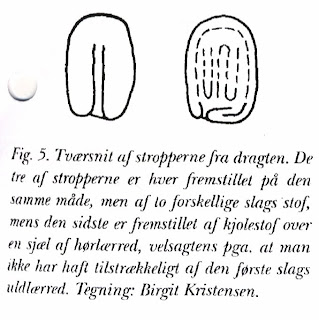 Rasmussen and Lønborg include the drawing on the right with their article, to illustrate the construction of the straps they examined from the Køstrup grave.  Apparently portions of four straps were found; two made from the same wool as the dress, one made from linen with a piece of the same wool as the dress covering it on the outside (as shown in the diagram, on the farthest right), and one made from a coarser wool tabby than the others.

These diagrams provided by Rasmussen and Lønborg appear to indicate that the straps were made much the same way that I make my straps; by taking a strip of fabric, folding the raw edges inward, placing the folded edges together, and whipstiching the edges.   Freydis Svensdottir's translation of the relevant portion of the article confirms my understanding of the diagrams, though it is still a bit cryptic. It reads:


Two of the straps were made of “band-shaped pieces of fabric (the same kind as the dress), that were folded lengthwise, so that no cut edges were folded outward. The edges were sewn together with hem-stitches. A third strap is made of folded linen tabby, over with fabric (the same kind as the dress) is rolled around, and fastened with hem-stitches. The fourth strap is made like the two first ones, but of a bit coarser wool tabby.

Page 176 (emphasis mine).  The text of the caption of Figure 5, which appears with the drawings,  is consistent with this reading.  It has been translated by Freydis as follows: "Fig 5. Cross-section of the straps from the garment. Three of the straps are made in the same way, but of two different kinds of fabric, while the fourth is made of dress fabric over a stem of linen tabby, probably because there weren’t enough fabric of the first kind of wool tabby. Illustration: Birgit Kristensen."

So in my efforts to finish one of the dullest parts of an apron dress as quickly as possible I seem to have stumbled upon the way it actually was done--or at least the way the straps were done for the Køstrup dress.

One final interesting detail about the apron dress portion of the find is that the tablet-woven trim is not the only trim on the apron dress.  Cord appears to have been sewn to the top and bottom of the tablet-woven trim, further enhancing it.  "Along both edges of the band there are two wool cords, sewn with hem stitches to the straps, but whose possible attachment to the band is uncertain.  Stitches in the lower cords and in the trägerrock indicate, however, that these cords somewhere have been attached, both to themselves [?] and to the trägerrock." (pages 177-178).  Sewing several different types of trimming material together also appears in the Birka graves, where silver wire passements or silver-brocaded tablet-weaving has been sewn to silk strips which themselves were applied to various garments.

I will try to discuss the "fabric sandwich" on top of the brooches sometime this weekend.
Posted by Cathy Raymond at 9:02 PM