Last weekend, I finally began work on the "fitted" wrapped apron dress  that I've been planning to make for months.

What I have done so far was to take my fabric, decide on the approximate length and cut the fabric to length and width.  Then, I wrapped the piece around myself in the manner in which the finished dress will be worn, and marked locations at each hip that will be slit from hip to hem for the insertion of long gores.

I'm not completely sure how to decide upon the size of each gore.  They need to be wide enough so that the top portion will wrap snugly without causing the lower part to twist, or fail to cover my lower body.
The diagram below shows the plan of  the rest of the construction.  (Bear in mind that this sketch is only roughly to scale and the location of all features such as tucks is approximate.)  The dashed lines  on the main body part represent cuts, while the dotted lines show proposed tucks.  Thus far, I have trimmed my fabric to the main rectangular piece shown below, and cut slits where the dashed lines are.  The numbers show the order in which each  subsequent construction step is to be taken, to wit: 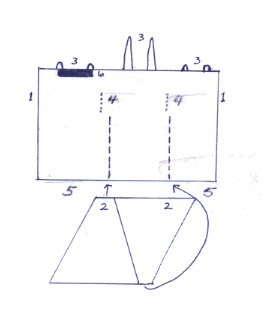 Is there historic support for this design?  No.  Moreover, I doubt that this design would have been used in period, because while the body of the garment doesn't require wasteful cutting, the more-or-less freehand cutting of the gores I'm planning would be wasteful of fabric.
On the other hand, the top portion of the dress isn't blatantly inconsistent with the archaeological evidence, and it's possible that a similar effect could have been achieved non-wastefully in period by piecing many small scraps of fabric into two large gores.  Garments such as the Viborg shirt show that the Vikings had no problem with piecing many small bits of fabric to achieve the effects they were after.
At this point, I'm mostly interested in demonstrating that it would be physically possible to craft a body-fitting garment that would not need to be wriggled into and that would have the convenient access to the breasts of the wrapped dress designs.
I will, of course, post pictures when the dress is completed.  Hopefully, I can make some progress this weekend.
Posted by Cathy Raymond at 11:53 PM