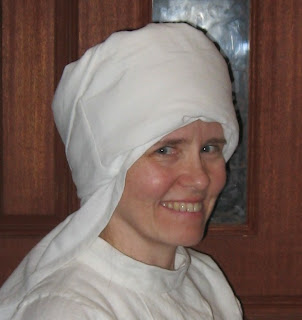 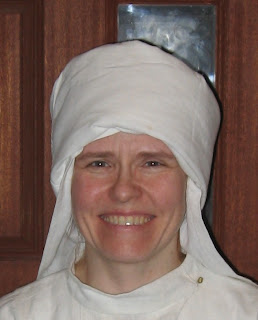 Finally, here are pictures of my savanion in wear. I made sure I ironed it before starting to wrap it around my head. That simple act has improved its appearance greatly over what it had been in my initial trial run wearing. I still need five minutes to wrap it properly, but once I have it wrapped and tucked it feels very solid and secure. I think it's rather flattering, even if it does make my head look huge.

While he was taking these photographs, my husband remarked that he thought the savanion looked rather like male Islamic headwear. Since the savanion is a close cousin of the turban, structurally speaking, and some Middle Byzantine women actually wore turbans instead, that strikes me as a rather astute observation.

Meanwhile, I am making good progress on the mantion, considering the fact that work and vacation plans have intervened. Hopefully, I will finish it before the end of the summer and can get started on the final, most important component of the outfit--the himation.
Posted by Cathy Raymond at 10:41 PM