I've previously mentioned in this blog that I've been making a tenth century CE Lithuanian costume. Actually, most of it has been made for a long while, but I got stuck on the shawl. However, I realized recently that I've made enough progress that it's worth trying the entire costume on (something I hadn't done before now!) and getting a few pictures taken of it to amuse or impress my readers.
The costume is based largely upon what I was able to pick up from Compleat Anachronist #59 about Regina Volkaite-Kulikauskiene's book on ancient Lithuanian costume; I've included the relevant picture from Ms. Volkaite-Kulikauskiene's book here for reference. (My costume is based upon the standing figure.). Some confessions  explanations about costume details follow for the curious.
First of all, the shawl is still incomplete; I need to sew trim on the short edges to conceal the fact that the fringe just consists of pieces of heavy yarn stitched on, and fasten some bronze rings to the shawl for decoration. I'm not entirely sure where I got the idea of red and white fringe for the shawl, but having read the recent article in Medieval Clothing and Textiles 6 I see that the shawl is more Latvian than Lithuanian. Having looked at Ms. Volkaite-Kulikauskiene's picture again, I will probably just make some copper coils, string them on some cord, stitch the cord on parallel to the short ends, and call it good. The pin set is from Raymond's Quiet Press after a find shown in Volkaite-Kulikauskiene's book. They would double as weapons of war; the pins are heavy and long as knitting needles. I gather that the actual pins were just as long, but thinner and lighter (and sharper) than these. I strung chains between them myself.
The skirt is 100% wool. It is made as a closed tube with a casing for a drawstring. The drawstring has bronze beads dangling from the ends. I had no support for this type of construction,.  However, at the time I made it I had no information of any kind about how the skirt might have been made, and I did know that the early Danes used a closed tube skirt with a cord threaded through the fabric. This seemed like a period-plausible technique.  My fabric was on the thin side; hence, the drawstring. The result produced a skirt that looks a lot like Volkaite-Kulikauskiene's picture above.  I have since learned that the experts believe that the early Baltic skirts were just wrapped fabric, like a modern-day sarong.. I'm not sure I would have used a wrapped skirt for this costume even if I was aware of the theory at the time.  I've always had trouble with wrapped skirts; they usually look ugly on me and tend to unwrap themselves while I'm wearing them (Smallish waist + big hips = problems with wrapping rectangular fabric).  The stitching effect at the bottom of the skirt is the selvedge of the fabric; I think it looks attractive and thus didn't  remove or hide it.
The shift is linen and is handsewn.  It's style is generally based on pictures I've seen in Ms. Volkaite-Kulikauskiene's book.   I still have no idea why she believes women's shifts had a collar, but I've seen another Lithuanian reproduction costume on the Internet with a similarly collared shift, and I thought it was possible that there was a neckring find with textile impressions inside the ring that I'd never heard of to support the interpretation, so I made the shift that way.  I purchased the neckring from an Internet dealer; it looks a lot like the ones I've seen in reconstruction pictures, including the reconstruction pictures on my Lithuanian costume calendar. 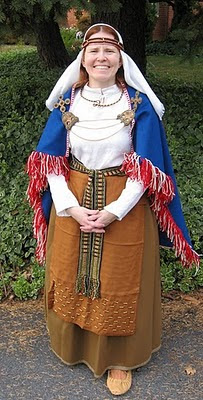 The apron is a very light wool gabardine, and is belted on in the manner in which the Eura apron is believed to have been worn, again because I had no better clue how the apron might have been worn. The belt is a "folk" Latvian design, purchased from BalticShop.com largely because I thought it would fit in with the other costume components and knew that it would have taken me much longer to tablet weave something vaguely appropriate myself. The shoes are also from BalticShop.com. I've made linen stockings, which I was planning to wear with the costume, but I couldn't find the pair I made for myself (they fit much better than these!) so I'm wearing a pair I bought from Historic Enterprises. (I haven't made myself any cut-and-sewn stockings from wool--yet.)
I made two different headdresses to wear with this costume: 1) a circlet, made from bronze beads (based on a sketch from CA #59 that I may have misinterpreted and don't know the provenance of) strung on elastic cord (I couldn't figure out how better to fasten it, though the originals must have tied) and stitched to a leather band, with a series of hanging chains  fastened to the back, each with a bell on the end, and 2) a veil and wimple, pinned with a "maple leaf" headed pin that I made myself of craft bronze. (You don't want to see it close-up, believe me; it's pretty crude.) The veil is wool challis; light, warm, nicely draping. It was somewhere close to $20 USD a yard; fortunately that quantity was all I needed for a veil and wimple. Please excuse the sloppy draping of the wimple, but I wanted to get the photographs  taken outside before dark, and because we're heading toward winter we lose the sunlight fairly early in the afternoon now. I folded the veil (which is nearly square) into a triangle to wear it, largely because I think triangular veils look better.  The recreations featured in the Lithuanian costume calendar use rectangular veils, which always look ugly to me and don't particularly seem to match any of the artistic depictions with which I'm familiar from the eras when veils were commonly worn.

I can't say this costume is based on especially rigorous research.  But I did learn a lot about working with natural materials, and about handsewing, in assembling it, and I've also learned more about early medieval Baltic costume over the period I've been assembling it.  So although I don't think this costume qualifies as a recreation, the process of making it has taught me about period costume in general, and about Baltic area costume of the period in particular.  Also, I think this costume does convey at least a bit of the flavor of Lithuanian costume of the period and how Lithuanian costume differed from the costume of the other Baltic areas.

One final observation:  except for the shawl and veil, the costume is quite comfortable; I wore it while typing in the first draft of this post.

Kudos to my husband for taking the photographs you see here. (I've eliminated the ones with dopey expressions or other major problems.) I will probably post a photograph of the costume once more, after I've finally finished the shawl--and at that point, I'll make sure to take more care with my headgear.
Posted by Cathy Raymond at 5:41 PM